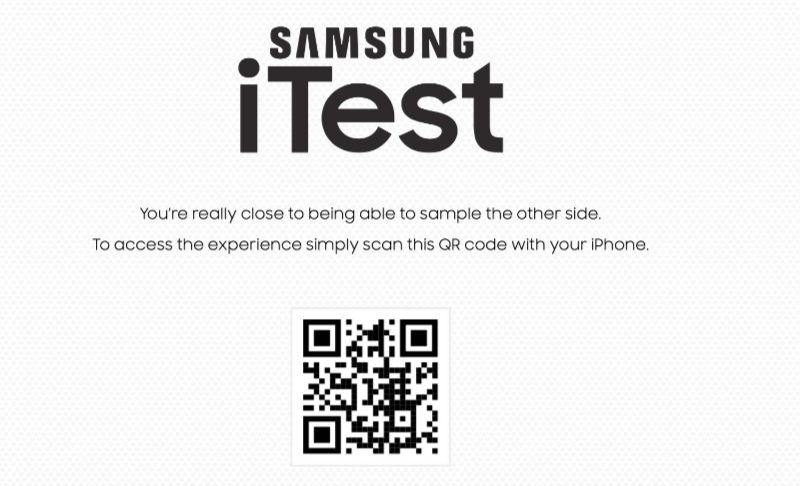 Samsung is stepping up its efforts to win over iPhone customers. The smartphone manufacturer has launched a new website called “iTest,” which allows iPhone users to “get a little taste of Samsung” by using a web application that simulates the Android experience.

When you go to Samsung’s iTest website, you’ll be asked to add the web app to your iPhone’s home screen. After that, you can launch it like any other app and play around with the Android interface.
According to Samsung: You’re about to get a little taste of Samsung, without changing phones. We can’t replicate every function, but you should quickly see that there’s nothing daunting about switching to the other side.

The experience is actually quite impressive, and it does an excellent job of replicating the Android and Samsung Galaxy experiences via a web app running on an iPhone. You can do a lot, such as browse the Galaxy Store, change themes, and explore the Samsung Camera app, among other things. The Galaxy Store’s banner image naturally promotes Fortnite, which Apple removed from the App Store.

When you’re in the Samsung iTest app on your iPhone, you’ll also get a variety of simulated text notifications and phone calls highlighting different things to try out and ways to communicate with friends. Of course, Samsung is also taking advantage of this opportunity to promote its other Galaxy products, including the Galaxy Buds Pro, Galaxy Watch3, and Galaxy Buds Live.

However, while the overall simulation experience is impressive, there are some flaws. Many of the apps only allow you to view the splash screens, and web apps have technical limitations. When you try to open the “popular apps” folder, for example, Samsung says: “Don’t worry, all the apps you love are available.” Because, let’s face it, the majority of them are Google products, and we’re good friends with those guys.

This experience, as first reported by MacRumors, is currently being advertised only in New Zealand, but the website is accessible worldwide. We wouldn’t be surprised if Samsung used this iTest experience to launch a global marketing campaign sooner rather than later.

Samsung’s new iTest website follows Apple’s announcement in January that the iPhone 12 series has resulted in an increase in smartphone users switching from Android to iPhone. With that in mind, it’s easy to see why Samsung is increasing its efforts to convert iPhone users to Galaxy devices.